Today was one of the most beautiful stretches I’ve ever ridden in France!

We started the day by going across the street to the train station and picking up our return tickets from Sète back to Bordeaux (none of the TGVs going from southeastern France back to Paris accept bikes, so we must travel back to Bordeaux).

Shortly before 10 we got underway and followed the pre-marked bike trail out of town. Conveniently, the “Piste cyclable Roger Lapébie” started right in front of our hotel. We crossed the bridge over the river Garonne and followed it through 5km of suburbs to the edge of town.

When we reached the town of Latresne, the landscape changed from strip-mall to country estate. Soon we were riding by gated estates surrounded by vineyards which changed to rolling hills covered with vineyards and farms and dotted by farm houses and vintners’ chateaux. Since it’s mid-August the vines were loaded with grapes, hanging low beneath the vines like purple and green udders.

The “Piste” opened in 2009 and runs along a former train line. What that means to the cyclist is that there are no steep inclines or descents. Yippee! This particular route runs through rolling countryside and little villages. In a couple of the villages the former stations had been converted to bike stations or picnic areas. We took cover under the veranda of one of them during a short rain shower.

There may not have been any steep inclines or descents along the “Piste” but it was certainly not flat. The first ascent was so slight that you hardly noticed it because it was drawn out over 20km. Over the next 25km there were a few flat stretches but mostly there was either a slight up- or downgrade. This was one of the aspects that made the trail interesting for me- you had to work just a little bit. Added than that, the scenery was fantastic.

We pulled into the village of Créon at around 11:30 and since it was too early for lunch service at the one and only café on the town’s main square we first drank a coffee and then promptly at 12 ordered our lunch.  My choice was a salad with warm chèvre on toasts - the perfect lunch for a day on the trail!

At about 3pm we reached the end of the trail in Sauveterre le Guyenne. It’s a good thing we weren’t starving, because there wasn’t a bite to eat anywhere in town. This can be a problem in France as most restaurants close in the afternoon hours and on Mondays many of the shops are closed as well. It always pays to have a few emergency provisions along.

We were able to convince the owners of the pizza joint to serve us cold drinks and studied the maps as we sipped our cokes. We wanted to reach La Réole, on the Garonne, by evening so that tomorrow we can get started along the Canal de la Garonne. Since there is no real bike route between Sauveterre le Guyenne and La Réole we had to stick to rural roads, which I find rather fun.

We got out of town at about 4:00 and immediately thereafter ran into our first of the seemingly thousands of short but steep hills in the last 20km of our day. This one caught us so unexpectedly that we both ended up pushing our bikes up part of the way. I had to push a few more times but most of the time could gather up enough momentum from the previous descent. It made for a strenuous end to our day.

We arrived in La Réole shortly before 6 and found our way to the banks of the Garonne where we used a combination of guide books and hotels.com (thank God for my cheap Internet roaming tarif for my cell phone!) to find a room for the night.

The only bummer was that we had to ride/push our way back up the major hill into the town center where our gite was located. But it was certainly worth it!

“Les Galantes” is probably the nicest B & B I’ve ever visited. The host and hostess were incredibly welcoming and the rooms were recently renovated with impeccable taste. After we settled in and washed off the road dust, we sat in the garden and drank a bottle of wine while chatting with the hosts and enjoying the antics of their 8-week old St. Bernard puppy, Ginger. He was sooooo cute!

It being Monday, only two of the town’s restaurants were open, so we chose the pizza place. As an appetizer I chose cantaloupe filled with the local Muscat wine. It proved to be delicious as was the chorizo pizza that followed.

By 10:30 we made our way back up the hill to Les Galantes and, after admiring the view of the lit-up town church from our window, hit the hay. 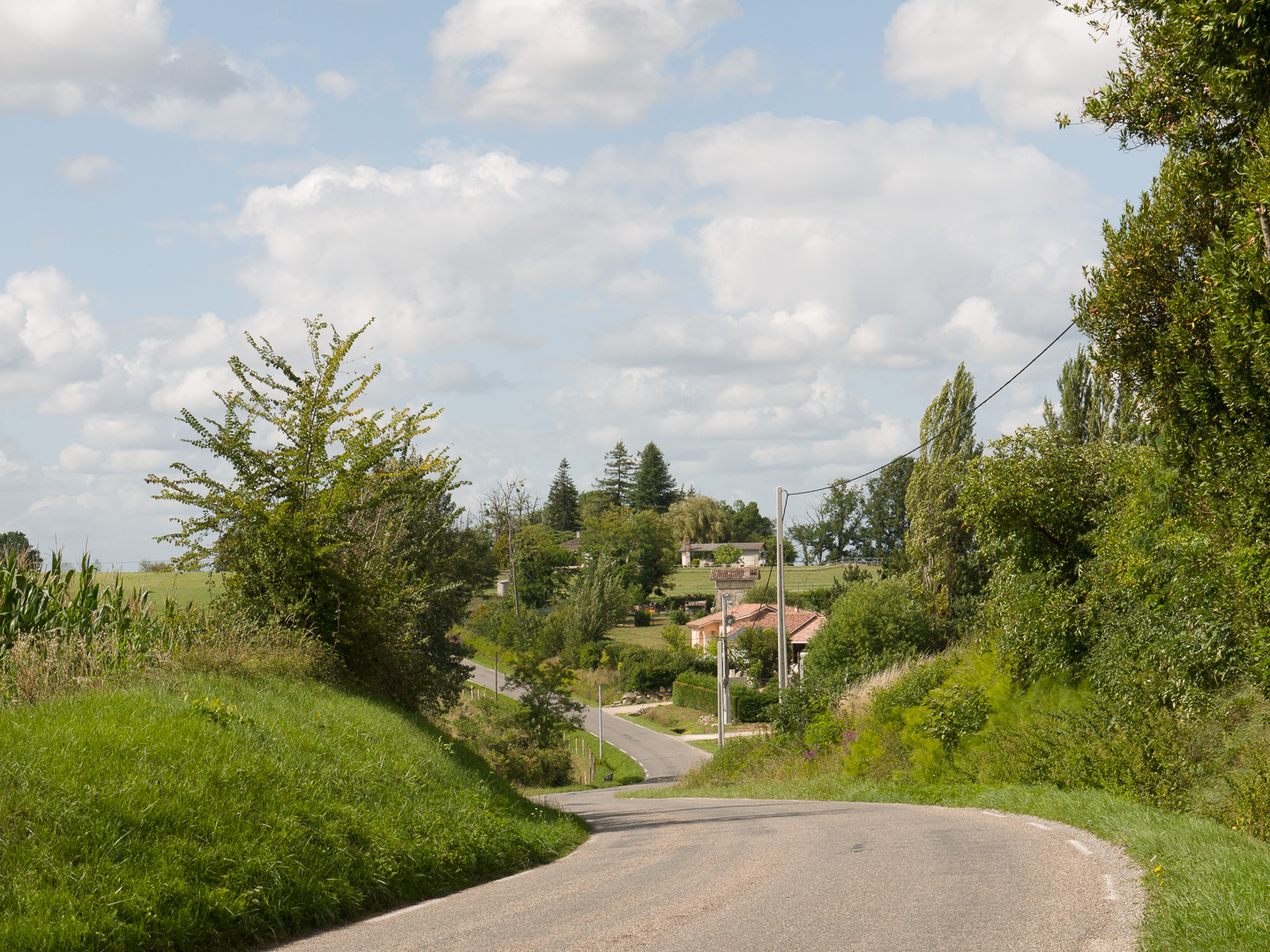